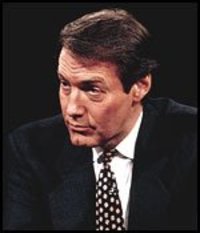 FYI: I write for another blog (a blog subsidiary of Ape Culture) where I do things like compose haikus for Sanjaya and critique other matters of American Idol (don’t hate me...it’s my job!). I also make inappropriate personal declarations in a manner I’m not wont to do here.

I watched the Charlie Rose interview from 1996 on Google Video. Overall it was a great interview. What I like about Charlie Rose is that he asks interesting questions; then he probes for clarification when an interviewee is vague. And Cher is often vague, which is, needless to say, her strategic prerogative. But it was refreshing to see a talking head challenge her. Rose does that in gently prodding way. So we get some interesting information regarding Cher’s interior life, her experiences in therapy, her criticisms of herself.

Charlie and Cher talk about the kind of insecure personality show business attracts. Cher also expresses disappointment in herself for not being stronger at times in order to do the right thing more often. This interview shows Cher is more level-headed and sincere about being a decent, stand-up person than many celebrities of her stature. It also hints that she might have a more realistic idea of her accurate self, which must be a challenge after living in the fame bubble so long.

Rose did irritate me with his constant comments about her smarts and stupidity. He spent way too much time telling her how smart she was, she spent way too much time telling us how smart she was, and then toward the end Rose calls her "so stupid" for believing, in a fit of guilt, that being a working mom might have contributed to her daughter being gay. First of all, this is not a correct idea but it’s not stupid. Many mothers feel guilt about being working moms – and many of them feel responsible about all sorts of things about their kids. It’s a normal maternal reaction; admittedly a knee jerk reaction after adjusting to a secret exposed. No big whoop.

But smarts is an issue that keeps coming up with Cher, going way back to her comments about being a naïve young girl and not being able to match socks, being dyslexic and not doing well in school, and to funny naivetés like thinking Mt. Rushmore was a natural phenomenon.

I was shocked at Rose’s usage of the word stupid. Coming from him, it sounded rude, especially after all the unnecessary smart buttering. It made me question his whole attitude.

I don’t really think Cher is stupid. But I’ve never played Trivial Pursuit with her so what do I know? I don’t think Cher has crazy mad verbal skills but I do think she has many smart visual skillz, plenty of street smarts (Sonny often derided her ‘smart mouth’). She has also exhibited many smarts in putting together a professional, talented and loyal entourage of business players. Such a dummy would never last so long in show biz.

The Cher clip only runs for a half an hour. The second half is an interview with Michael Keaton. Thanks to the Follow This You Bitches blog for finding the interview on Google Video.

Btw, the last time I played Trivial Pursuit I only knew one answer and it had to do with Harry Potter. :-(

I think she is actually smart, but lazy....and I feel a kinship with her, in that regard. Not necessarily book-smart, but intuition-smart. Outside of her fans, she really gets no respect.....especially concerning her music career. Too bad, cuz she could've done alot smarter music along the way, if she really tried and had more confidence. Seems she's gone backwards actually....her 60s music is the most mature, strangely enough, and she's progressively gotten ditzier over the decades. I still love 'er!

I would agree with almost everything you've said. I would only take issue with the idea regarding the maturity of her music. I agree that the 60s-era pieces are most mature musically. But the lyrics of everything from Man's World, Believe and Living Proof are remarkably more evocative, poetic and show much more life maturity than the compositions from the 70s or 80s.