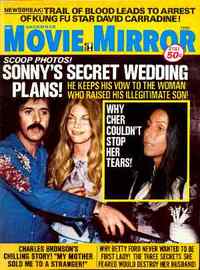 I’ve been thinking a lot about this latest tabloid story mentioned in my last post. First of all, we should remember: tabloids murdered Princess Diana by causing her to flee too fast through a tunnel. I can’t condone buying them. They're sinister and they make celebrities cry...for no good reason than to feed our insatiable appetite for gossip.

That said, I tried to buy my own copy of Cher in the aforementioned rag last week. But I never found it. Or rather, I bought the wrong issue, mistaking plain-face Lindsay Lohan for Cher on the cover. I KNOW. It’s very embarrassing! Not only did I spend way too much $$ for a magazine full of lies on recycled paper, but my Cherdar was way off. I was mortified about it, believe me. I ended up stashing the "wrong copy" in the downstairs bathroom so I could brush up on the antics of Pamela Anderson Lee Rock at my leisure.

But I was even thwarted in that when my significant roomie read the thing faster than I could and threw it out before I got two articles in. Was I miffed!

So the whole episode was an exercise in disappointment. How could I mistake Linday for Cher? How on earth could that happen? Am I getting senile? Have I lost my touch? In high school, I used to be able to pick out "Cher" from a scan of teen mag text in seconds. I was a sort of Cher-savant. I had mad celebrity obsession skillz. So what happened?

The Internet, that’s what. The Internet Cher groups have made me lazy. I now wait for the next generation of Cher teen fans to do all the hunting and scanning. I sit back in my office and wait for the news posts to rain in through my email and tell me when the next Cher appearance on TV or in print is. It's been comfortable life, yes. But I've missed a few things.

It’s made me soft.

But it was the Internet that came through in the end. The rag scans eventually appeared online. It was interesting to finally see the photos some bozo captured of Cher walking on a beach. How creepy if you fully visualize the scene: some dude following Cher around in the sand, walking backwards with his camera.

Cher is so  far from fat in the “Now” photo” and possibly too thin in the “Then” photo. You can just as easily say Cher is 26 pounds away from being too Nicole Ritchie in the “Then” photo. And where do they get the 26 pounds from anyway? It completely robs the story of any credibility. Maybe the family cat, lurking near Cher’s knee at the bathroom scale was the crucial leak to a reporter, a man lurking with a can of Fancy Feast by dumpsters at the Cher compound gate. Or does this rag have some special photo-scanning weight software that measures muscle to body fat? If so, the software is probably extremely buggy and can’t take into consideration shadow-camera pounds and sea-wind interference in pantaloons.

The whole country is crazy. We're either all too fat or too thin. Our collective conscious is contradictory, self-abusive and meaningless. Who’s gained 20 pounds today? Who’s lost 20 pounds tomorrow?

I’m working on a new poetry project that involves a lot of research on Zen Buddhism. In the Buddha’s teachings of The Noble Eightfold Path, he discourages gossiping which is opposed to Right Speech. Think of your karma. Indulging in salacious gossip is never done is good spirit. These rags reek of bad karma.

But we’re so human. We fold like cards. I rationalized my mis-purchase in order to "weigh in" on the photo debate - was it real or was it Photoshoped; but I really wanted to satiate my curiosity about the possibility of there ever really being a fat Cher. Aren't we Cher fans are lonely for Cher news, too. She hasn’t been in a legitimate magazine for a while, let alone done an interview.

As Chris Rock said many years ago: I'm not saying it's right; but I understand. Let’s all move on from this unsavory incident. If you must engage in this sort of activity: play the Cher Scholar Tabloid game instead.

Speaking of gossip: is that Mimi Machu up there with Sonny? Scholarship, gossip...it's a fine line.