Kansas City
Return of the Dolls!! 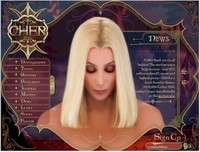 Rumor had it that Cher.com officially sanctioned the news about Cher replacing Celine Dion at Caesars Palace in Vegas next year. Although I dreaded doing it, I visited Cher.com to see if this was true. Almost immediately I was reminded why I never visit this official Cher website. There’s been no news update since her auction last year, and certainly no mention of any upcoming Vegas deal, upcoming album, upcoming movie, or links to Cher causes so fans can join the bandwagon and donate, or any other such things that a fan of a major celebrity website might expect. There’s even a broken link in the main navigation to the Cher store. A broken main navigation link!  What a ghost-town this site is!

Cher’s official site has always been high on effects and low on content. The maddening thing is that this is also what the public-at-large has accused Cher herself of being: all fluff and no substance. Well, the site subliminally confirms. As usual, I am frustrated in three minutes and I leave in a huff.

One of Cher’s great strengths is that she resists a kind of Dolly-Parton type of Unchanging Presence. I love Dolly, don’t get me wrong; but Dolly has habits of image that have stuck years upon years. Cher re-invents and this is why she is so representative of her time, decade after decade. But unfortunately that kind of skill of habit is what you need to run a decent web site.

Crappy site or not, Cher fans are very loyal. It’s a very unrequited relationship: “Rejection always was our bitter pill.” Getting information out to the fans is a low priority and the site would be a ghost-town except for its still-active forums, which on Cher.com can be a veritable insane asylum.

So there's been recent talk among fans about Cher having a MySpace page at www.myspace.com/cherdotcom. Is it fer real? The big yahoo Cher group has been debating the issue. Here are my two wooden nickels on the subject:

Yes it is?
Because Cher.com is a lonely place without Cher actually being there, we’d love to believe Cher has an active Myspace page and this page is definitely friendlier than Cher.com , certainly with a lot of words and links splashed around. What I hate about MySpace is the messiness of the layout and complete absence of any information architecture. Everyone looks like a maniacal ego trip in two columns -- with or without some zany background tile. This is why I have yet to join Myspace (along with my general dislike of joining things). It's hard to read.

Can we image Cher devoting her time to a Myspace page? I would more likely believe it if someone in her entourage advised her of its marketing advantages, (they’re so popular with the kids and all), and she decided to relegate it to some under-appreciated, over-worked, personal assistant underling. This Myspace page reflects a more low-key Cher and definitely hits upon her up-to-date interests, unlike the web site: Harley motorcycles, the men of the US armed forces, and a corner of memorial space for Sonny Bono.

But no it isn’t!
There’s just something in the “About Me” section that seems off-tone. Cher describes herself as a “mature actress.” Mature is not a word I’ve ever heard Cher use to describe herself. Then the page incorrectly claims Cher won a Best Supporting Actress Oscar for Silkwood. She didn’t win that award. Linda Hunt did. It’s very hard to swallow the idea that Cher or any Cher peon would forget how many Oscar’s she had. Also, the home page pictures are not personal or rare;  they’re all news photos, something any fan could grab off the Internet. I can’t access the photo album or blog; but I’m tempted to join just to get a peek at them. On the Yahoo group, one fan doubted this site’s authenticity, commenting that official Myspace pages generally have a music player at page top (see Taylor Hicks’ official page). This proves legitimacy apparently because one has to be certified as themselves before installing such a player.

But yet it could be…
Well, if you’ve been a fan of Cher for a long time you know that sloppiness isn’t a stranger to Cher product from time to time. So unfortunately that doesn’t rule her out. Peons do make mistakes after all, player installations could be too much of a hassle, and since when has the Cher camp actively promoted any Cher music but what has been on the store shelves for under 6 months. Besides, in Cher’s Friends’ Comments, Tommy R. of Malt from Shoppe Productions seems to think the space is real.

So Cher sites, real or not, give us no reliable link to Cher news. Even the official fan page has been deserted of late. It’s a pity. I guess until those hot little Vegas tickets show up on the Caesars Palace or ticket bastard websites, I will never feel sure Cher will indeed replace Celine Dion. I mean just because Liz Smith writes about it: it aint necessarily so. In Cherworld, that’s just a declaration of intent.

But I will be happily surprised when the time comes to shell out hundreds of dollars for a new Vegas Cher show. Seriously. I’m not being facetious. Well, not entirely. I’ve always wanted to see Cher in Vegas. I just thought I’d be a rich adult when the time came.

Maybe Elijah built Cher's myspace for her. he would certainly be sloppy.

It sounds like cher.com could use the services of a good web content specialist...you should send in your resume!