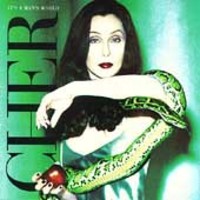 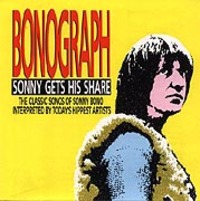 I’ve been talking a lot about Cher getting her due respect in the rock community; but as I was uploading all my CDs into my iPod, I came across the 1991 Sonny Bono tribute album Bonograph and it occurred to me something needed to be said about Sonny Bono and the respect he's never received for some of his better songs. He did write his share of duds and chucklers – really dated material with dorky 60s hipster lyrics. Some more painfully off the mark than others. But he also wrote some clean, moving extended metaphors. I wrote about his whole western motif in the first Cher zine. So I’m glad this CD was made although it’s full of bands that never came to much.

Needles and Pins by Flat Due Jets – Is not quite what I want from the song. The Searchers version was irritatingly happy. Cher's cover sings it with bass and pathos. The Ramone's sing it like The Searchers – with that crazy "pinzah" word – but Joey Ramone also taps into something he Searchers don’t – the misery of the song – Cher and Joey Ramone get it.

Laugh at Me – tortured but messy even in Sonny's version. Otis Ball improves it a bit and ends with a rockin ode to I Got You Babe.

Baby Don’t Go by Charlie Chestermann and The Harmony Rockets – I really like the Sheryl Crow/Dwight Yoakam remake of this – a song I’ve never really liked. This remake is a whiny, harmonica-laden version.

Koko Joe by Ben Vaughn – This is quite an impressive early dig-out that pre-dates Cher. It sounds very dated but interesting in it’s reinterpretation.

Bang Bang by The Frampton Brothers – a silly remake. Lots of covers have been made of this song, including haunting versions by Nancy Sinatra and Stevie Wonder.

Magic in the Air by The Wishniaks – Some these songs are one-step more deadpan than Cher’s renditions if that is even conceivable.

The Beat Goes On -  This is actually a fun boppin version by The Spuds. A cute sax part runs through it. Sure makes Britney Spears' version sound like a dud. It’s no Herbie Mann, however. Check out iTunes for that.

Our Last Show by Scott McCaughey – better than Sonny’s version. More touching for some reason. You could almost see Gwen Stefani singing it, too.

I Got You Babe – Have you heard The Dictator’s version? I’m sure you’ve heard Cher’s own remake with Beevis and Butthead. Tiny Tim, Etta James, UB40 with Chrissie Hynde? This is the The Cynics take on it. Yeah… I’ve never really heard a bad version.

My Best Friend’s Girl is Out of Sight by Agitpop– This song isn’t a horrible as it sounds like it might be. The original or the cover.

It’s the Little Things by The Skeletons – The best cover in the set. They really bring the song to life.

I Look For You by Peter Holsapple – a deep catalog choice and a nice track with a good contemplative guitar.

You Better Sit Down Kids by What Else – Ick. Trying too hard to not try too hard. This is the only one I fast forward through.

It’s Gonna Rain by Pink Slip Daddy – This was almost the single instead of I Got You Babe? I can never quite believe it. The song sounds so dated these days. This version is long and repetitive. And Pink Slip Daddy can’t match the funkitude of Sonny & Cher’s old version.

Pammie’s On a Bummer – by The Jimmy Silva Sextet – Headache-inducing intro, outro and everything elso. This song would be a challenge to improve.

Sonny’s message on the liner notes make me wonder if he wasn’t worried these artists were making fun of him with this tribute. He's so reserved. I don’t think they were, however. There are not, for the most part, kitschy versions. But it is interesting to see how Sonny is always saddled with an association to Cher. Even this CD’s subtitle references her: “Sonny Gets His Share.” Very punny. I miss some of his better, 70s material: ‘Classified 1A,” “Somebody,” and the best of all – “A Cowboy’s Work is Never Done.”