Is Cher a Feminist?
End-of-Year Listmaking

It's a Sonny & Cher Christmas

This is a melancholy Christmas season for me: it’s the first year I’ve spent without my parents. Granted, I’m 37 years old. I could look at it like “Oh, what a nice, extended, spoiled childhood I've had.” However, I still find myself mourning the missing stocking overstuffed with gadgets and candy, my mother’s mashed potatoes, my dad’s spiked egg nog, Christmas Eve clam chowder and family conversation, even the kind that makes me pull my hair out.

Thinking about my parents on Christmas takes me back to 1979 when I was nine years old. Back then me and my two brothers used to riffle through the Sears catalogue to get ideas for our Christmas list. I had just discovered record stores the year before. Every time I went to the mall, I now made a b-line to the Sonny & Cher tab at Record Bar. This only lasted for a year or two. Eventually, I came to the store and the Sonny & Cher tab had disappeared. Then the Cher tab disappeared, not to return until 1987!

This Christmas, my family made a trip to Chesterfield Mall where my mother left us to do some secret shopping. Hours later, I stood at the top of the escalator watching her ride up with a brown Record Bar bag under her arm. At that very moment I knew I would be getting the most coveted gift on my list: the 1971 album Sonny & Cher Live.

Slow, conversational banter serves as the transition between the songs. At different times in my life I have found it funny or not-so-funny. They goof on Sonny’s mother, Sonny’s singing, their sex life. All the sexual innuendos went right over my nine-year-old head. It’s must racier banter than one would find on the TV show. And they only sing three of their 60s hits: a long, experimental version of “The Beat Goes On,” Sonny singing his solo hit “Laugh at Me” and a lounged-up version of “I Got You Babe.” They were moving away from hits for an act of cover tunes, just as Cher would do for decades to come. They covered three Beatles songs, a Spiral Staircase hit, a Judy Garland standard for Cher, who also torches up “Danny Boy.” That song used to bore me to tears when I was a kid. I religiously skipped over it. Now, I’m so moved by it, I get real tears. It’s a weird mix of music, this album. I’d listen to it for hours on my parents' huge phonograph player; and I'd look over the cover artwork which taught me my first lesson in understatement. There was very little in the way of liner notes, considering we had a luxurious gatefold amount of space for some. The images looked like snapshots from a night club show circa the early 70s…very darkly lit, some fuzzy red, white and blue stage lights, a listing of the band-mates, arrangers, producers, and other usual suspects and that was it. 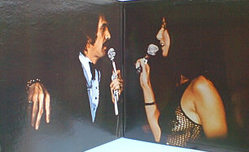 On the cover,Cher is half shadowed out in the foreground, while Sonny stands blurred behind her…an interesting and ironic arrangement. You can barely make out Cher's outfit. God forbid! And Sonny is in his then-current uniform, a bow tie and tux. They’re holding comically clunky microphones. Spread large and wide in the gatefold photograph, there is no text, just profiles of Sonny & Cher as they sing to each other. For the duration of the album, for lack of reading material, you could focus on Cher’s armpit (the best in the biz according to Bob Mackie) or her mesh top, those fabulous microphones or Sonny’s ominously large yet handsome dropping hand. Is that a bracelet he’s sporting?

I felt a kind of perfect childhood happiness when I opened this present on December 25, 1979. Even though I already knew what it was before I ripped the wrapper. My mother never made any attempts to hide record album gifts, which we received every year. I listed to the album first thing that day. In the years following, I wore it out. I’m still listening to a bootleg CD copy today. I don’t know who the MC is who opens the concert. It sounds suspiciously like Chuck Barris of The Gong Show: “Ladies and Gentleman, the Westside Room proudly presents SONNY AND CHER." I regret we never now use this old-school way of introducing a show. It’s still chilling and exciting every time I head it.

This is one of my fondest memories of Christmas. I hope this year you find a gift under your tree that will continue to give you warm feelings for decades to come. Happy holidays!

You'll like this: I picked up that album at a vintage clothes store (and ooh my I love that record to bits)and I opened it to see the fantastic (yet confusing) layout inside and right in the crack in between Son and Cher's faces was a large bug wrapped in a thirty year old spiderweb. Just had to share when I read your fabulous post.