Wait a minute....
It's a Sonny & Cher Christmas

Is Cher a Feminist? 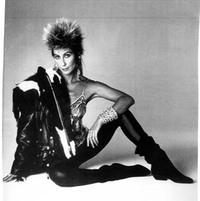 One night in college I had an epiphany. I realized, quite suddenly, that I didn’t have to define myself by a boyfriend and the end-game to my life wasn’t “married happily ever after.” I could, in fact, take care of myself, answer for myself, and be myself. Luckily, I had some working-women as fellow students to serve as role-models. In graduate school, I jumped into the world of creating and reading zines (underground magazines derived from old fan and punk trades). I came across the modern feminist zines Bust and Bitch which I’ve been reading for many years since. Feminist rock anthologies are now barely starting to mention Cher as a rock chick of note, but rarely do feminists texts mention Cher at all. Although she was on the cover of Bust a few years ago, the article contained little explication of her role or attitudes about feminism.

So imagine my surprise when reading the 10th anniversary issue of Bitch recently and I came across a Cher dis in the article  “Everything You Always Wanted to Know About Feminism But Were Afraid to Ask” by Rachel Fudge. Feminist Judith Halberstam, Professor of English and director of the Center for Feminist Research at USC, was asked “What is the most significant accomplishment of the past 10 years [for feminism]?” Halberstam listed a few militant feminist activities of note and then ended by saying, “Apart from that, I was happy when Cher retired…”

Consider Katharine Hepburn again. Her parents produced a child who, by living with feminist intellectuals and activists, internalized the first-wave feminist message. Katharine Hepburn then took the message to pop culture, gave it a living context and boom! The thing was done. By seeing publicity pictures of Katharine Hepburn wearing pants (how outrageous!), feminism was actively defined. Women could see it, understand it subliminally. Although when you asked Hepburn, she poo-poo the idea of identifying herself with second-wave feminism (the 70s ERA movement and Gloria Steinem). Hepburn lived it. Why talk about it?

I would argue that likewise Cher has provided pop culture with similar feminist imagery. Whereas Madonna has engaged feminism in her life through artistic statements, Cher’s feminism is less of a pop-academic endeavor. With Cher, there is more human integration regarding her life as a feminist project.

Evidence of this: Cher historically says what she feels (however unladylike it may come across: see the swearing entry last month). Cher resists being intimidated by male-dominated industries (Rock 'n' Roll, Hollywood). Cher has produced independent, single-woman-supportive statements and imagery throughout her career, living mainstream feminism in ways more effective than simply writing a book about it. After all, a picture with pants speaks a thousands feminist words.

Imagery
What she wears part 1: Cher’s androgynous apparel of the 60s and her in-your-face flamboyance (via Mackie-wear from 1971 to the present) has served to mobilize both working class women and a large group of gay men because it encourages us by example to be who we are and express ourselves without apologies.

What she wears part 2: Cher’s paparazzi street-wear from the late 70s and 80s (torn jeans, chain mail, leather) also delivered a message of toughness and show women that you can have duality of personality. Tough one day, feathers the next. You don’t have to be Dolly Parton 24/7. You can walk the streets without makeup and live to tell about it.

Words To Live By
Cher’s mother once implored Cher to settle down and marry a rich man for security. Cher’s reply: “I am a rich man.” Granted, there was a time when Cher was a dependent wife of varying sorts to Sonny Bono and Gregg Allman. The 70s were possibly a big learning curve for Cher as an independent woman which involved emancipation from Sonny and their marriage-as-business, career resuscitation with the help of David Geffen (not known to be a feminist-sympathizer), and struggles in care-taking Gregg Allman (also no paragon of female empowerment; he was once quoted as saying woman have only two uses: making the bed and making it in the bed).

Certainly by the mid-80s Cher was not allowing herself be defined by her men. Cher even bulked the romantic establishment by daring to date, and not marry, younger men. It takes feminist balls to do that in a world where women are to this day seeking the older husband to take fatherly care of them.

Cher’s 80s and 90s rock singles and videos also show a strong, sassy woman: "I Found Someone," "Believe," "Strong Enough," "Just Like Jesse James," and "When the Money’s Gone" all portray a first person narrator of power. In fact, the video for "I Found Someone" showcases Cher’s 80s persona of a touch chick fighting for what she wants.

Cher’s movie roles have also been mainly strong examples: Rusty Dennis fighting for her son in Mask, Sissy struggling with mastectomy in Come Back to the Five and Dime, Jimmy Dean, Dolly dealing with lesbian issues in Silkwood, a defiantly single mom in Mermaids.

The thing is, Cher is not a 100% perfect feminist. This, I guess, is why her name finds itself on the feminist target list. To some degree it might be the overt sexuality, the circus silliness of her concerts, or finally, the cosmetic surgery. Understandably, cosmetic surgery irks feminists because it undercuts our ability to just be who we are. It contributes to the dirty game of confirming we’re not good enough as a woman of years or a voluptuous woman or someone with a beauty mark when beauty marks just aren’t “in” for this decade. I can’t, myself, blame Cher for this breach of feminism since the problem is so epidemic in an entire generation of women. Hard-core feminists may find it easy to resist even the routine of daily eye-cream applied to ward off wrinkles, but it’s not so easy for the day-to-day feminist soldiers out here. Would it be nice for budding feminists out there if Cher aged like a blues singer? Sure it would. But you can’t misapply her feminist balance because of it.

I don’t often consider outright Cher’s contribution to feminism. But it certainly irks me to see her tallied as a feminist problem. I simply don’t agree. In fact, most female Cher fans I’ve met tend to be working class men and women who respond to Cher’s defiant independent imagery. Five decades of Cher resisting pop-culture obsoletion should speak for itself. She’s a tough broad in many ways where it still counts.