So while the Cher fan club is still in lock down, I make a different kind of Cher-related purchase today. I bought a copy of the documentary “The Ground Truth: After the Killing Ends.” News reports this week have Cher promoting this documentary, trying to get 5,000 copies into the hands of active US soldiers abroad.

Patricia Foulkrod made the film about the soldier experience from recruitment to discharge, in particular—about the difficult experience of returning home from Iraq.

Allegedly the US military has prevented Cher’s distribution efforts to soldiers. I forwarded these reports and a film review to a close friend of mine who has worked closely with the Veterans Administration office in Los Angles and is well trained in the claims process.

We're going to watch this documentary so we can have a heated debate for the benefit of all Cher scholars. We've already discussed the issue of the distribution block. The problem might be due to the fact that the US government is unable to accept any kind of gift distributions or perceived political distributions of any kind by law, whether positive or negative. They can't even accept free tickets to pro-vet events. I'll debate this and other issues raised in the movie concerning possible gaps in benefits for returning soldiers and other perceptions about VA support.

If the military believes the documentary is an activist piece, many reviewers do not. Christopher Cambell says the film tries to be apolitical: “…to think of the film primarily in terms of politics would be unfair to its subjects, the vets who are simply looking for an outlet.” Read the full review.

Here is a synopsis of major reviews to date on the film which have mostly been good:
http://www.rottentomatoes.com/m/the_ground_truth/

You can order a copy for yourself here: http://thegroundtruth.net/. Ten percent of the proceeds go to another project Cher is passionate about: Operation Helmet.

This week I also received a Cher care-package from fellow Cher scholar Robrt Pela: a home-made bootleg of the unreleased Cher album from 1968, “Backstage.” Cher recorded a smattering of anti-war songs back in the 60s during the Vietnam War era (mostly Dylan-covers), but my favorite was the in-your-face “Masters of War.” I recently heard Mike Stinson do a good version of this song at the Cinemabar on Sepulveda in the Culver City area of LA. I’ve always loved the lyrics and Cher’s passionate punctuation of certain lines, especially the final ominous ones. 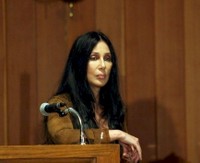 These lyrics were found on the Russian Cher site: http://lyrics.procher.org/.

I would like to watch this movie too! can't wait to read your feedback about it.