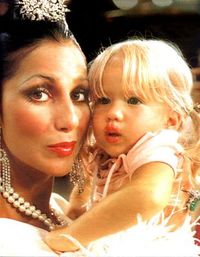 Well...still no fan club sign-in on the official website. I carry on. Maybe it's time to catch up on our Chastity Bono news.

Chastity also appeared on A&E's Sell This House where she had her house in West Hollywood blinged-out for prospective buyers who had been hatin on it in prior showings. Vampin houses just aint Chas's thang like it is her mummys. I can relate cos collecting Christmas cookie jars aint my thang either. Although if my mom decides to part with her shot glass collection, I'll find storage space for that.

There are reports that Chastity is working on the development of a coming-out movie for the gay TV network here! Chas is co-writting "In the Name of Love" with Garth Belcon who wrote a 2004 movie called Froterz that Chastity appeared in. No word yet when this movie will be coming out, no pun intended.

Chastity has also talked about working on a  book about growing up with her parents, S&C. No word on the progress of this project either. Her previous books, The End of Innocence: A Memoir written with Michele Kort (2002) and Family Outing: A Guide to the Coming-Out Process for Gays, Lesbians, & Their Families written with Billie Fitzpatrick Fitzpatrick (1999) were both good reads.

Chastity really needs her own website. She has a Gene-Simmons-like amount of projects going on.