Cinderella
Rejected Blog Title #1: When My Bloggies Have Dollies 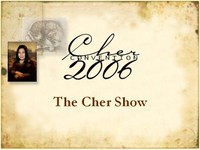 The Cher Convention deserves its own post, really. So I won't go into that right yet: the difficulties, the disturbances, the humor and the joy, the disappointments, the sorrow, the learning experience, the community, my inability to stay up past 10pm. All that's in there.

I've always supported the Cher Convention. I always loved the idea of conventions in and of themselves and the Barry Manilow Convention always served as my model of an ideal Convention. Jam packed full of art, education and debauchery. Beatlefest and the Kiss Expo just reinforced that idea. At Beatlefest, there was an art gallery of Beatle-wife art, guitar sing-a-longs in the hallway and tons of vendors. The Cher Convention isn't like any of that for various reasons. But it's still a thing worth doing. Cher fans just don't bring their guitars to Cher Conventions. And how else can you get a spontaneous sing-a-long to "Heart of Stone" going? Maybe someday there can be an art gallery of Sonny Bono photographs, some of which are quite good--I always thought.

The thing is--I feel strongly that a convention should have an educational component, both for the newbies and oldies alike. Ward Lamb did some great seminars for the 2000 and 2002 conventions, but was MIA for 2004 and 2006. In 2004, the educational spot was saved by an interview with Mary Anne Cassata, author of the must-have Cher Scrapbook, a fan book stocked to the hilt with great Cher photos.

This July, I ended up doing the seminar, but not for lack of trying to finagle no less than three other Cher Scholars: Ward Lamb again (he wrote a great article for Cher in Goldmine; liner notes for the Sundazed Sonny & Cher releases and the Rhino release of Sonny's InnerViews; see also his Amazon product reviews); Jo Kozlowski (a writer from Chicago who helped me with the first Cher zine in 2000; check out her website, Cricket in the Corner), and Robrt Pela (a writer from The Phoenix New Times; check out his article, The Virtues of Chastity). These Cher aficionados couldn't do it for various reasons.

The seminar I put together was based on the theme of the 2006 convention--The Cher Show of 1975-6. The slide show is located on www.cherscholar.com (under Cher Conventions). You can also find it by clicking here. During the seminar, I pontificated a bunch of extra blather about the show with the help of Christopher Brisson (writer, poet and cultural commentator) and Javier Ozuna (a major collector who had been to some tapings of the show).

Someday I hope to post a whole Cher PowerPoint curriculum with a final quiz you can mail in for a diploma in Cher Scholarship. Feel free to post or email me your syllabus ideas.

i wish i had that The Cher Scrapbook of cher