Kiss and Make Up
The Cheekbones of Katharine Hepburn

Genie in the Bottle 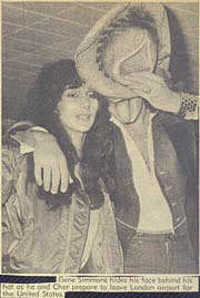 Today I was about to join the Official Cher fan club, especially since I recently received my Barry Manilow fanclub newsletter in the mail. Although I haven’t been much of a Barry Manilow fan since I was 15, I still enjoy their entertaining and informative fanclub activities. This bi-yearly newsletter was no exception, with photos of Barry’s August Las Vegas convention (which he attended) and his own heartfelt fan Q&A column. It was exceptional, I must say. But alas, the Official Cher Fanclub website will be down for days unknown due to some kind of update.

So I guess I’ll take this opportunity to chat about Cher peripherals. Peripherals are characters in the Cher orbit and may include children, lovers, co-workers, or the entourage. They have an interesting shelf-life in and of themselves. Peripherals like her kids would normally be afforded some kind of deference of privacy unless they make their own gestures towards fame, such as write autobiographical books, participate in reality TV shows or release industrial goth-rock albums (allmusic.com’s words, not mine). Cher has cute nicknames for these peripherals when she refers to them in press interviews. If they have names with more than two syllables, she breaks it down to one, such as Chastity to Chas or sister Georgeanne to Gee; if they have one-syllable names, she pops them up to two syllables, such as Gregg to Gregory or Gene to Genie.

I happen to be watching the Genie Simmons reality show these days as my friend Coolia is a KISS fan and Family Jewels on A&E is always on her Tivo. Cher and Gene were a media super-couple in the late 1970s. They met in February of 1978 at a party for California Governor Jerry Brown thrown by Casablanca record-label head Neil Bogart. The met just as Cher was beginning to make disco albums on the same label, which was also KISS’s label. To orient KISS fans, their relationship started just as KISS started making the TV kitsch-classic KISS Meets the Phantom of the Park. Gene and Paul Stanley (and Cher secretly) claimed to have hated disco at the time, although Casablanca was a heavily disco-centric label, also being the label to Diana Summer among other disco acts. Rumor had it the Take Me Home album cover Viking-fit 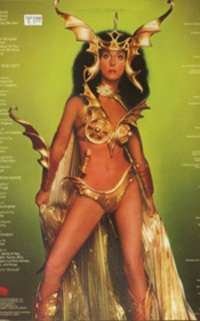 was inspired by Gene and that Paul Stanley also dated Cher’s sister, Georgeanne. Common scenes in tabloids featured Gene with his face obscured by a handkerchief (because no one was supposed to see KISS without makeup until they relented this charade in the early 80s) and his arm around what appeared to be a suddenly very tiny Cher. None of her other boyfriends or husbands ever seemed so tall before.

Cher stories abound in endless KISS biographies. In KISS Behind the Mask (paperback pgs. 86-88), Gene talks about how Cher was the first real relationship of his life, how he thought Cher was “real Hollywood” and yet never really part of "that scene," how the industry felt their relationship was just a Casablanca publicity stunt.

You can also find juicy details about Gene’s feelings in his own biography, Kiss and Makeup (hardcover pg. 140-159). There’s a funny passage with Gene learning how to jog on the Malibu beach with Cher, Gene in leather pants and snakeskin boots. As if that wasn't embarrassing enough, they run into Neil Diamond. Gene also recalls how they were refused habitation at The Dakota in New York City, the building depicted in Rosemary's Baby and where John Lennon lived and where he was murdered. On page 140, there’s a picture apropos of the time, with Gene, Cher, Bill Sameth and Neil Bogart.

KISS and Sell the Making of a Supergroup (softcover pg 180-186) recants their relationship and the breakup as well, with Gene leaving to Diana Ross and Cher to Les Dudek.

Years after all this KISStory was published, I’ve seen many cocky Gene appearances, from record release parties to video interviews to lectures, all with Gene posing arrogant and debauched. The family series, although a far cry from surprising innocence of Ozzy in The Osbournes, turns this Gene-myth on its head. However, many of the situations on the show feel inauthentic, like phony reality show setups (such as long-time girlfriend Shannon Tweed sending Gene to fat camp and Gene bribing a driving instructor to win a driving test). Despite this, the take-away from the show is how decent Gene comes across and how normal and cool his kids, Sophie and Nick, seem to be, especially the witty and charming Nick. (If only I were 16, I'm just saying.) Tales of the playboy Gene seem like all too much shtick. This isn’t a far cry from what Cher told People Magazine circa 1978 and 1979 that underneath all the showbiz bravado, there was a big softie underneath.

There was a smattering of brouhaha involving Cher during early publicity for the show. Apparently on Howard Stern, Gene and Sharon bickered over the fact that Cher still sends Valentines to Gene. There’s also been one episode so far invoking Cher's name. Cher sent Genie a picture of herself and Shannon tells of swapping out Cher's photo but keeping the frame. It’s hard to take even this drama seriously when you watch Family Jewels. Shannon doesn’t sound convincingly pissed and one can't but wonder if Cher was probably just professional networking.