The Cheekbones of Katharine Hepburn
Cinderella

Another Day of Not Being Official 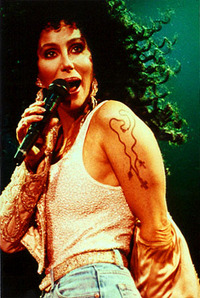 I am struggling through another day of not being an Official Cher fan. This never bothered me until the opportunity was gone. I always thought my being an outsider to official Cher-fandom was a personal choice. Now I just feel marginalized and downtrodden.

In today’s Los Angeles Times Book Review, there is a story called “The Botox Generation” which reviews two books, “The Female Thing (Dirt, Sex, Envy, Vulnerability)” by Laura Kipnis and “Beauty Junkies (Inside our $15 Billion Obsession with Cosmetic Surgery)” by Alex Kuczynski. I was reminded of my last post about Cher’s cheekbones...and discussions in general about of Cher and plastic surgery. Why plastic surgery bothers us as a culture; why Cher has become a poster-child for plastic surgery; and what fans admit to or think about the whole thing.

Plastic surgery along with yo-yo dieting makes for big business hinging on feelings of inadequacy no matter how you'd like to spin it. Kipnis believes women have a constant need for radical and dangerous self-improvement because they carry a subconscious belief that their bodies are repulsive and their “vaginas are dirty” hence the disturbing rise in labiaplasties, a procedure that reshapes a woman’s external genitals. "A young woman is a swamp" as Enid Dame says in her poem "Cinderella." However, the most succinct text on body self-hatred is probably still “The Sneetches” by Dr. Seuss. It’s timeless really, showing how extreme body alterations are not only expensive but arbitrarily devised. Who decides you need a star on your belly? Who decides you labia is unattractive? Why is the natural always made to be so un-natural in all areas of the female body?

In the past, Cher has made a business case for her decisions (not that she is required to defend herself for her private issues and choices). Show business, after all, demands a youthful look. However, plastic surgery hasn’t equated to more Cher movies. And Rock and Roll seems more accepting of an aging woman; artists like Patti Smith and Bonnie Raitt pride themselves on their battle scars.

My theory: there’s special public discomfort over Cher and her plastic surgery. The reason is two-fold. First of all, it suggests maybe Cher is not her public image at all. Maybe she’s got very real weak spots and poignant fears of aging. That 80s big-hair image seemed fearless, in contrast. Accepting that disconnect is always uncomfortable. Secondly, that image meant something to us. Her F. You attitude seemed impenetrable. Is our collective fear of aging and imperfection so powerful that even a tough broad like Cher could succumb? I believe it is. And that's scary. "She too undone." We mourn the loss of that particular Marine in our struggle.

And I'm not judging. Who out there can pass judgment, honestly? Who out there over the age of 37 hasn’t slathered on some anti-wrinkle eye cream yet? I look in the mirror and exclaim “I’m not even grown up yet! I’m still a kid!”

And who can fear a physical death when we are so active in our own self-destruction? Today, in an anthology of fairy-tale poems called "The Poets’ Grimm" (edited by Jeanne Marie Beaumont and Claudia Clarson), I read poet Ogla Brouma’s “Little Red Ridding Hood” where she sums up the situation: “…across this improbable forest peopled with wolves and our host, flower-gathering sisters they feed on.” Feminism accurately shakes its academic little finger at the problem but hasn’t changed anything. What we really need is a Katharine Hepburn to come along and say “I’m freaking wearing pants and that’s the end of it.” We need to see it. Hepburn’s feminist mother discouraged her career in Hollywood as an unserious and unimportant feminist pursuit. How ironic then; she sent a little feminist-fed Hepburn onto the world stage to be feminism embodied, an image of how a woman can be.

Kuczynski’s book disparages our culture “in which images hold more power than words.” But honey, this aint new. I just returned from Lexington, Massachusetts, where I visited a Revolutionary War tavern where propaganda art, not just speeches, were used to ignite the passions of the locals. We’ve always responded more to the power of images. And that should be our ace. For the image is where Cher excels.